Cooper.  During the week before Halloween, we were surprised to suddenly see a few plastic jack-o-lanterns for sale in some corner stores; but we didn't see much anything else being sold for Halloween, and so we weren't sure that Halloween would really be here.

When we asked our teachers at our current Spanish school (mom & dad who have 4 kids), they said that Halloween in Arequipa has only become popular in the last few years. Because of that, the city hasn’t really got a good idea of what Halloween should be quite like other than ‘the kids want candy’.

Our instructors invited me to join their family on Halloween night, which was really nice of them to do and it was fun.

Instead of like it is in Canada, where everybody goes from house to house and says “Trick or Treat!”, in Arequipa no houses have any candy, in fact many households don’t even believe in Halloween. But families and kids can go around from store to store, restaurant to restaurant, and barber shop to dentist office on all the busiest roads in the city. It's a little crazy, with lots of people trying to cross these busy streets and there are hardly any traffic lights that work - but it is like this every day!

For Halloween, my original plan was to get my face painted, but then I decided instead to get a small costume at the local market. My rainbow wig has multi-colours on the back (which you can't see very well in this picture). Observe its awesomeness: 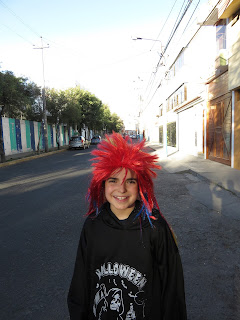 I don’t know how much trick or treating you do, if any, but in Canada I always get lots of candy (spending about 3-4 hours doing it). It's really different here! Unlike at home, where I need 2 large bags to hold all of the treats, here my one small bag isn’t even a quarter full (for about the same amount of time) - and I even got a few flyers and coupons from some of the businesses. 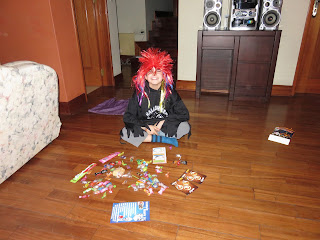 These things aren't bad, just differences in another country, as we knew there would be. The next holiday is Christmas, where we plan to be in Rio, Brazil. We’ll see what the differences are then, too.


Carolyn.  As Cooper mentioned, Halloween is new in Arequipa;  our Spanish instructors explained that it has only come about from local people seeing North American movies and TV shows...and actually Vern and I think it's sad that this outside influence is now shaping Peruvian culture.  We would have been content, even pleased, to learn that Peru did not have Halloween (even though Cooper was VERY happy to go out trick-or-treating!).

Having said that, the major missing thing here is the lack of packaging and marketing of specialized Halloween candy. Any of the candy that was given out by the participating businesses is only the 'normal' candy that can be bought here - generally they had a bag of individually wrapped hard candies on their counter, and would then give out ONE candy per kid.  No mini-chocolate bars, no mini-packs of Skittles, Smarties, etc, no small bags of potato chips or cheezies.  All these candies/snacks exist here in their full sizes in the corner stores and large supermarkets, but it obviously has not occurred to any manufacturers or distributors to bring the Halloween merchandising of their products here.  Good.