Cooper. The Amazon Jungle is the biggest rainforest in the world, and it is very, very hot and humid too. We flew to Iquitos, Peru which is a city in the middle of the Amazon Jungle - and it is also the biggest city in the world that you cannot reach by road (only river and plane). It has a population of 800,000 people. We arrived in Iquitos on November 12 and left a week later on November 19, staying a total of 3 nights in Iquitos, and 4 nights in the jungle itself.

To get to our lodge in the jungle, it was an approx 2½ hour boat ride down the Amazon River. We stayed at a nice place called Otorongo Lodge which, in the high season, has about 30 people there at one time, but we were there in the low season, so there were only 5 of us. We saw many different animals, like: sloths, caiman (a small crocodile), many different frogs, pink river dolphins, grey river dolphins, wild dogs, monkeys, lots of birds (parrots, toucans, and too many others to list), tarantulas as big as an adult’s hand, capybaras (like rats the size of beavers - they are officially the biggest rodents on the planet), and lots of fish (piranhas that we caught, catfish also that we caught, and other types of fish we saw in the rivers).

The Amazon River is about 2 kms wide where we were, which is already VERY wide.  It can get much wider in the rainy season (3-4 kms wide) as it floods into the surrounding forests every Feb-May; and it also gets much wider as it goes toward the ocean (in some places we're told you can't even see across to the other shore, the distance is so far). The length of the whole river is about 6450 kms.  Sometimes it doesn't feel like you're on a river, it feels like you're in the middle of a big lake; but when you get nearer the shore to see how fast the water is moving past, then you realize how fast the current is, and you remember that you are on a river, not a lake. The only down side about the jungle is the malaria mosquitoes, but we are taking medications to help prevent it.

There were many activities to do (and we did them all). We swam in the river, all 3 of us! We also hiked through the jungle lots, including a trail to see a huge tree, visited local villages (including a school), and saw giant lily pads that are bigger than me! We took our boat to see if we could spot the unique river dolphins, and then also saw them every day on our boat trips to see other things too. We hiked through grasses taller than me - it felt like a scene from the movie 'Honey I Shrunk the Kids'. My dad and I even went out camping in the jungle for one night. We used real machetes to chop jungle vines out of our way.

We went fishing twice while at the lodge, once for piranhas, and once for stingrays. We all successfully caught a piranha (12 keepers big enough to eat). When we went to fish for stingrays, no luck, but my dad and I caught a catfish each, big enough to take back to the lodge to eat. The cool thing that the lodge does is that if you catch some fish, they cook it and put it out to eat on the table for lunch or dinner. Here is a picture of me catching a piranha. They have very sharp and pointy teeth! 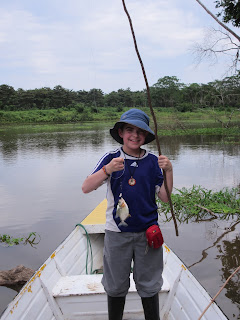 The meals in the jungle were great. At breakfast we got eggs, bread, cereal + milk, and a local type of bacon. For lunch there was chicken or fish, bread, potatoes, and rice. For dinner: catfish (which was really good, even though I don’t like seafood/fish), bread, rice, and potatoes. Our room was a family cabin behind the main lodge, because the main lodge rooms were all for only 2 people each. Here is a photo of our room. 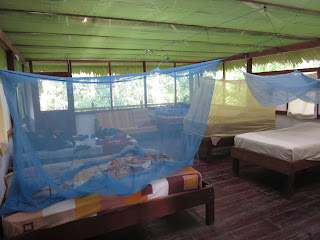 After our 4 nights, 5 days in the jungle, we headed back to Iquitos, which was an approx 3½ hour boat ride up river. Out in the jungle, it’s full of peaceful, natural bird sounds, so it’s a big difference to go back to the city again. In Iquitos, their local ‘taxi’ is called a ‘moto-taxi’ (and in India, the same vehicle is called a ‘tuk-tuk’). It is a small 3-wheeled motorcycle with no doors. There are also LOTS of motorcycles. It is not very common to own or see a full-sized car in Iquitos, because it is so hard to get vehicles into this city - they must be shipped on a plane or by river. Here is a picture of us moving in one of their moto-taxis! 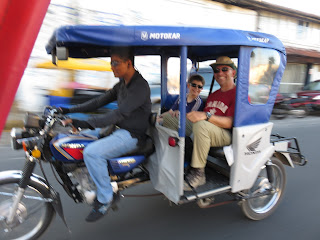 Also, to see pictures from our world trip so far, click this link:
Trip Photo Album