Taking the Bad with the Good

First:  this entry has been a little while in coming, but there needed to be some mental healing time before we wrote.  And the act of writing has been a therapy of sorts…

Well, New Year’s Eve is always a big party – and probably the biggest party in the world is on Copacabana Beach in Rio de Janeiro, Brazil.  About 2 million people, they say.  And we were excited to be part of it.

Unfortunately, we also experienced the first truly bad  incident on our trip.

We were warned – and our own common sense told us – that there would be pickpockets in the crowd, so we safeguarded against this.  No purse, no wallet, nothing in loose pockets.  Our few valuables (a little money and the cell phone camera) were secure in our zippered pockets.  But we didn’t expect to be physically attacked.

We got to the party early, around 8pm.  There were already many hundreds of thousands of people watching a samba dance show on the huge beach stage.  We were merely three people in the massive crowd.  Vern decided to take a picture of the stage show, along with thousands of others.  You know how it is:  so many arms in the crowd raised above heads with a phone in hand, taking a picture.

Suddenly a hand reached up and ripped the phone away. Vern tackled the thief, who dropped the phone, but unbeknownst to Vern there were 4 other guys joining the attack too.  Everyone dived to the sand for the phone, and Vern was at the bottom of this beach scuffle, but the other guys were pulling him away and one of the gang got the phone first.  This all happened in about 1 second, before Carolyn or Cooper even knew something was happening.

In the next second, when Carolyn realized Vern was at the bottom of a pileup, she immediately concluded this must be about the cell phone, since it was the only valuable thing we had with us.  As the guys started to scatter, she got a good hold of one guy’s shirt, while Vern rose to give chase to the others. The guy Carolyn was latched onto dragged her until they tripped on someone’s beach chair, then she was flung off, and someone else fell on top of her.  In the meantime, Vern was chasing the guy he thought had the phone, with the other conspirators running interference. The chase crashed through beach chairs, vendors and bystanders.

When Carolyn rose from the sand, she saw Vern disappearing in the crowd, and she immediately looked for Cooper  who was still standing just 10 feet away, exactly where it all started.  Probably only 5-6 seconds had elapsed.

Cooper was understandably scared – actually, like most of the crowd, he didn’t know what had happened, he just heard the commotion, then he saw his dad running away, and he saw his mom thrown down in the sand.  Once he was with Carolyn again, she told him that the phone was being stolen, and they stood there a while hugging and crying.  Several bystanders checked with them, but everyone spoke Portuguese, so they had no idea what was being said, except to know their words were kind and reassuring.

Just as they were wondering whether they should stay there waiting for Vern, or go to our pre-determined “if we get separated” meeting spot, Vern came back, with a grim look on his face…and bleeding…the phone was gone.  Vern thinks it was passed around amongst the gang as they made their escape, and all was eventually lost in the crowd.  We only realized later that Vern’s prescription glasses were torn from his head during the chase, adding to the loss.

Both Vern and Carolyn wound up with minor injuries.  Cooper was unhurt, just scared.  We spent the next three hours filing the police report and getting patched up at one of the many first aid stations set up for New Year’s.  Happily we got back to the beach in time for the countdown to 2016, which was now even more crowded than before.  The fireworks were amazing – the biggest and best display we have ever seen.  But bittersweet.

More than anything else, Vern was fuming, and is still getting over the anger.  The incident is one of those things you hear or read about, removed from your own reality…until it happens to you.

The reaction from the police and local Brazilians was perhaps the most dispiriting:  “Yes that happens a lot”, or “Sorry it happened to you, but it is very common”, or “My sister was downtown just this morning and had her gold chain torn from her neck.”   These unchecked, almost accepted assaults and thefts are a poor outlook for an otherwise world-class city.

The incident did knock the wind out of our sails for a few days.  But then we got out again to enjoy the beauty of Rio, including a thorough exploration of shopping centres and technology venues to buy a new cell phone.  But the event did sour our Rio experience and we were happy to move on. 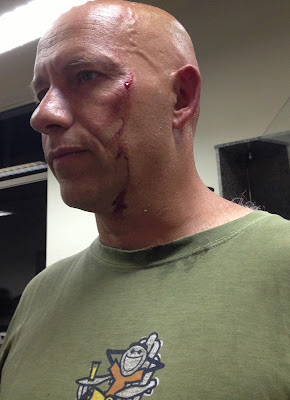 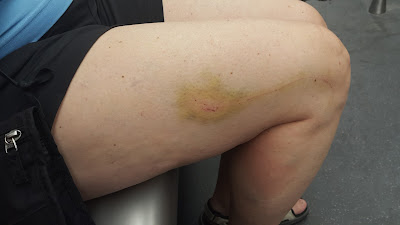 To see pictures from our world trip so far, click this link: