Fortaleza, a city of 2 million in north-eastern Brazil, is home to one of the best water parks in the world and the best in Brazil. The whole reason we visited Fortaleza was to see the water park of course (how could we not?) called Beach Park. It has 26 slides and spans 12 city blocks along the beach! One of the 26 slides is the Insano, a slide with a near-vertical drop that gives you a second of free-fall and goes 105 kmph!!!  They also have a massive tube ride called Vaikantudo, made in Canada! It's a HUGE rainbow toilet bowl that flushes you down the drain! 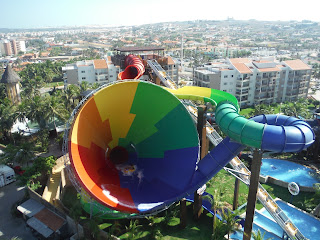 It was so much fun to be here for four days after Christmas! Here is a picture that I took of my dad going down Insano!  My mom went down, too.  But I was *just* too short :( .  Luckily they have a smaller version of Insano which was also awesome for me. 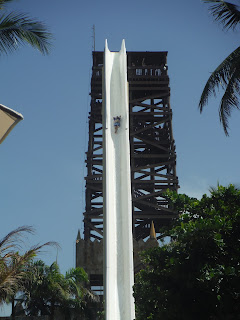 Yes, it was tons of fun here.  The 'best' thrill was the capsule slide, where the floor drops out from under your feet - I'd never done anything like that before... 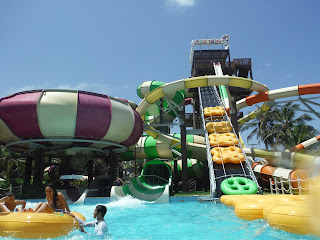 To see more pictures from our world trip so far, click this link:
Trip Photo Album