I consider Brazilian BBQ - also known as “all-you-can-eat-meat”, “meatfest”, or “meat-a-thon”- to be one of the true pleasures of being a non-vegetarian.  (With apologies to my vegetarian and vegan friends.)

For any that have not experienced this phenomenon, the premise is simple:  You walk in, sit down and are provided with some kind of “go/no-go” token – perhaps a small flag or a coaster that is red on one side, green on the other.  As long as you have the “go” side showing, servers will periodically come by your table with huge hunks of meat on a spit, and offer you any or all of it.  (It’s bad form to ask for the whole skewer, at least all at the same time.)   This eating marathon continues until you put on the “stop” symbol, feeling several kilos heavier.

A visit to Brazil would clearly be incomplete without at least one meal at a BBQ abode.  In Rio, we chose Fogo de Chao, a highly-recommended Brazilian BBQ establishment.  We were not disappointed.  The ongoing selection included pork, chicken and over a dozen different cuts of beef.  Patrons are provided with a map of the different cuts, in Portuguese, English and German.

Fogo de Chao also includes a generous salad bar, as do most Brazilian BBQ restaurants.  Here’s a tip for the uninitiated:  go easy on the salad bar and focus on the meat.  If you want leafy things, go someplace else.  The same goes for the tasty appies and delicious-smelling bread rolls that the tricky servers bring you to fill you up.  Ignore them.   It is your responsibility as a diner to maximize your meat consumption.  If your chair does not creak from your newly-acquired kilos by the end of your meal, you’re doing something wrong.  And, hey, it’s mostly protein anyhow, low on carbs.

An interesting side note:   As soon as I entered Fogo de Chao, I had the feeling I’d been there before. It brought to mind a memorable meal in Minneapolis.  I checked the back of the menu, and sure enough, one of the restaurant’s locations is Minneapolis, Minnesota, USA.  So:  you don’t have to come all the way to Brazil for the experience.  Now get on out there and eat! 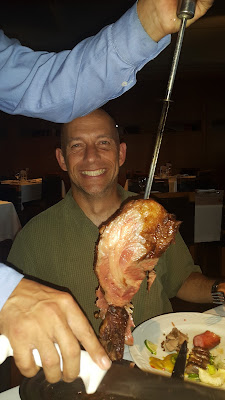