Cooper. It’s the end of the world! Antarctica really is the end of the world. In Canada, it is winter now, but down here in the southern hemisphere, it is summer. However, when you usually think of summer, you think of a nice warm day, t-shirts and shorts, but in Antarctica, you’re wearing all of your layers to keep warm. My dad and I took a boat down to Antarctica, while my mom stayed back in Buenos Aires, Argentina, because she made a promise that she would go nowhere near winter during our year of travel, and Antarctica in the summer still counts as winter.

To get to Antarctica we flew to Ushuaia, which is the southernmost city in the Americas, so that was already cool (both types of cool). From Ushuaia, we then took a ship two days across a stretch of ocean called the Drake Passage, which is known to have horrible conditions at certain periods of the year.  Luckily it was good for us on the way there. And then we were in Antarctica!

While we were in Antarctica, we set foot on land six times.  At other times we cruised around in a small boat called a Zodiac to get up close to water wildlife and icebergs. Each time was fantastic. We were guaranteed to see two types of penguins: Chinstrap penguins (my personal favourite), and Gentoo penguins. But we were lucky and saw two more types of penguins: a Macaroni penguin, and an Adelie penguin. Here is a picture of the Macaroni penguin (which the staff on our boat have named Kevin) 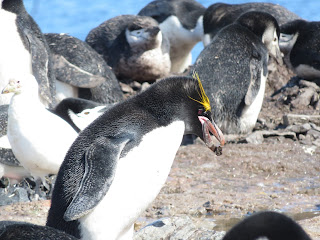 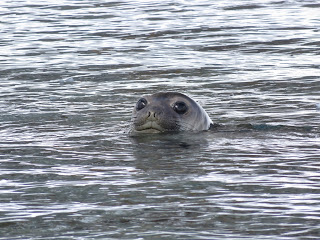 On the last day of our Antarctic stay, before we went on the Drake Passage, we visited Danco Island, which had a very long, and very steep hill on it, and we all hiked to the top. After we spent some time up there, we had to come down, which would take about 10 minutes to walk, so my dad and I took the quickest, most direct, and awesomest way down the snowy hill: on our bellies like a penguin! It was so much fun!

After sliding like penguins, we got back on board and set off to a bay where we anchored the ship. With icebergs all around, the bitter cold air, a thin amount of ice covering the surface of the water, and lots of snow falling from the sky, it was the perfect place to go jumping into the freezing cold water. My dad and I did it of course, along with about 60 others (with a total of 170 passengers, lots of them were chickens for not doing it). The water was COLD, only 1 degree above freezing! Here is a picture of me jumping into the bitterly cold Antarctic Ocean!!! 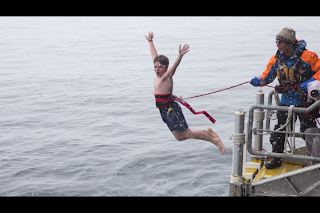 The Drake Passage was not nice to us on the way back, and my dad, being prone to seasickness (along with 100 other people) really didn’t feel that great. I even got seasick, and it’s rare for me to get seasick. After our survival of the two days across the Passage, it felt really good to be back on solid ground in Ushuaia.

To see more pictures from our world trip so far, click this link: 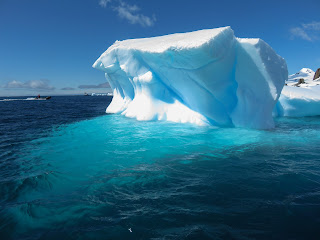 Vern.  Our voyage to the 7th Continent aboard a Quark Expeditions ship was outstanding.  The Antarctica landscape is amongst the most stunning I have ever visited.   We saw dozens of glaciers, hundreds of icebergs, and thousands of penguins and not once did I tire of the sights.  (Well, OK – a lot of the penguins do look alike.) The Quark staff were truly phenomenal, and they all paid special attention to Cooper (the only minor on board).  The food and service were top notch.  Our waiter, Vlodomyr, performed a different magic trick for Coop almost every day.  The expedition staff (and most of the passengers) all knew Cooper by name and on the last night he was brought up on stage to be a part of the nightly entertainment, participating in “The Ice Show”.

Yes, travelling aboard the Ocean Endeavour in cruise ship cabins is a long way removed from the forays of Amundsen, Scott and Shackleton.   Plenty of smoked salmon and fresh-made omelettes; no need to consider eating sled dogs, staff or other passengers.
The only (slightly) negative part of the trip was the crossing of the Drake Passage; that dreaded stretch of sea between the tip of South America and the Antarctic Peninsula.  As I wrote parts of this entry, my chair often slid away from the table and I had to fight my way back to the keyboard.  Despite the seasickness pill and my wristbands, I was still a bit off.  The laptop was facing the window, where I could type while staring at the horizon; it helped.  The ship was very quiet and few people were in the lounge, which was telling.  Even Cooper was feeling ill and laid down in our cabin, barf bag on hand, waiting for the seasickness tablet to kick in.

We had several good whale sightings of humpbacks; well worth getting geared up and braving the wind and cold on deck.  We’d also been very lucky with penguin species – we saw four out of the eight species in the Antarctic:  Gentoo, Adelie, Chinstrap and Marconi.   Plenty of Gentoo (i.e. thousands), same for Chinstraps (though their colonies are only in the north), and a single confused Marconi along with a single Adelie spotting.  Happily, I have pictures of all.  The tall and colourful Emperor and King penguins live further south than we’d travelled.

Cooper and I partook of the “Polar Plunge”.   Staff and passengers alike were once again impressed with Coop; however, there was no question that we were going to do it.  And yes, the water was very cold.  For safety reasons, jumpers are harnessed should they need to be pulled out of the ocean.

I would do this trip again and go down to the South Georgia islands.  A longer trip, but the scenery and history are worth it.  And the food isn’t half bad either! :) 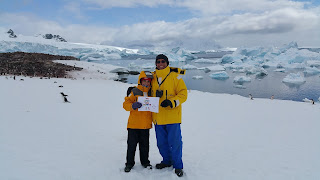 To see more pictures from our world trip so far, click this link: