Vern.  In 1902, a brilliant American engineer named Willis Carrier realized that he could dry air by passing it through water to create fog.  This flash of genius led to the development of the modern air conditioner.  Mr.  Carrier’s invention would be responsible for changing lives worldwide.  However, I doubt that at the time he realized that he was instigating a new religion.  Here in Costa Rica, with humidity at close to 100% and daily temperatures of 30+ degrees Celsius, many tourists may be glimpsed performing the daily ritual known as “AC Worship”.  This ceremony, which lasts anywhere from a few seconds to several minutes, has been touted as life-saving, and travellers are normally willing to donate to the movement through a modest increase in the cost of hotel accommodations. 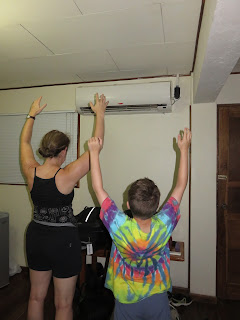 Carolyn.  For the record, WHEN we have A/C in our hotel room (which is not always), we have been keeping it set around 26 or 27 degrees...which really is still laughably warm compared to the 21 or 22 degrees that many people would set their A/C to back home.  It's amazing how a cool 27 degrees inside can deliver blessed relief, without being too cold or obnoxious!!  I really don't know what the outside temps are here on the NW coast of Costa Rica, surely mid-30's (haven't seen an outdoor thermometer anywhere - huh, maybe I should start looking).  But it's the humidity that is killing us.  Even though it's a bit cooler in the mornings, the humidity hits you like a wall when you open the door...then you get used to it...sort of.  The vibe here in Montezuma is very slow and relaxed, and a big part of that is that the heat & humidity make you feel quite lethargic, so you have to SLOW DOWN and take about ten times longer to walk anywhere than you might otherwise!

None of this is complaining.  It's wonderful to not be in a rush.  We are loving it here in Costa Rica.


Later update:  I finally saw a weather report when we were on the south Pacific coast.  Temperature forecast to be high of 36 degrees, with the humidex it was predicted to feel like 47 degrees.  Yep.  47 degrees is not what we're used to feeling in Canada!