Cooper. This is a “Fill in the blanks” blog post, where I go back to talk about cool things from the last week or more that haven’t been blogged about yet. Also, just a little list of places we have been in Costa Rica so far: San Jose, Tortuguero, La Fortuna, Monteverde, Montezuma, Manuel Antonio.

July 30, back in La Fortuna

When we were there, we went to a hot springs called Baldi. They say that they are the largest hot springs in the world (which I believe). They have 20 pools, 3 really fast water slides, and 1 “toilet bowl” waterslide! We spent over 3 hours there. But… the funniest thing happened. We were putting things into our locker and we hear “Hi Carolyn!!!”, and we turn around and see our babysitter from Calgary that we had for me years ago! She was here with a summer school travel group with other high-school kids. The waterslides were awesome, and one went 50 km/h!!! My grandparents told me they saw on TV that it was one of the world's Top 10 fastest waterslides! It was hugely fun. Here is a video of me going down the fastest one!

(We all listened to the video a few times, and I would like to say that I'm NOT swearing there, even if it sounds like it)

Luckily we rented a four wheel drive car! The drive from La Fortuna to Monteverde was the worst road that we have all ever been on. There are potholes feet deep every few metres, the roads are super skinny, and it was dark for quite a bit of it. Once we finally did make it way after dark, we got to our hotel (a youth hostel) and went to bed. We didn’t like our room there because it had problems with almost everything, so we moved to a fancier place called El Establo (which means “The Stables” in Spanish - this place used to be a farm with horse stables) and the view from our room was gorgeous!

We woke very early to do an hour hike in the nearby cloud forest reserve (because animals are more active earlier). Our main goal of the hike was to see a quetzal, which is a very beautiful bird and often hard to spot.  It is unique to here and Panama, I think. Our guide told us it is the national bird of Guatemala, even though they don't have any of these birds in their country!  My dad really likes 'quetzal' because it's the best Scrabble word. To our surprise, we saw one just 2 minutes into our hike! In half and hour, we had seen 9, and even our guide was excited, and said he had never seen that many in half an hour! At the end of the day, we went to a serpentarium and saw lots of snakes, turtles (In grade 4, we had a class pet turtle named Tortuga, and here I found out that Tortuga means turtle in Spanish!), frogs, and lizards. From our hike in the morning, here is a picture that I took of the quetzal. 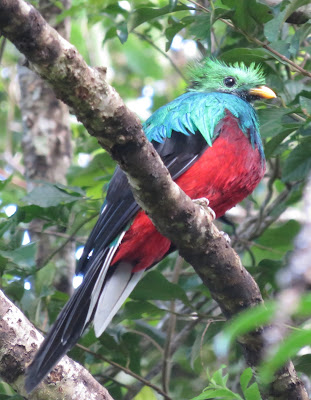 Carolyn.  A note about picture taking: yes, this is taken with Cooper's Fuji point & shoot...with the small camera lens held up to the powerful tripod-mounted lens on the guide's bird-watching scope.  This technique gives amazing photos - suddenly fantastic zoomed photos are possible with crisp, clear beauty through the scope.  We use this technique again on other guided hikes.

In Montezuma, we all had two sets of Spanish lessons. However, two sets of Spanish definitely was not enough, we needed at least four, five, or 182 lessons. In those two lessons though, I learned a lot! For anyone who knows what “!Yo tengo queso y no me asusta usarlo!” means in Spanish, then that’s a good thing, because that’s my favourite Spanish sentence! (use google translate if you don’t know). I also learned numbers and some words, but Spanish is really confusing. I will be taking more lessons in Ecuador and Peru.

Also while we were in Montezuma, we went to a big waterfall and a small waterfall. You could swim under the big one, and jump off the small one - which was still pretty big! The water was really deep, and the jump was up about 10 meters. They also had a Tarzan swing into the water. Here is a picture of us at the bottom of the big waterfall. 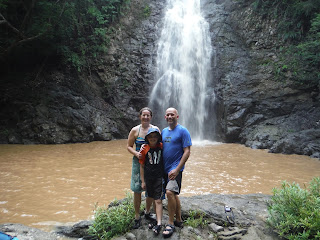 Please feel free to leave a comment on the separate posts we make.  We enjoy reading what you think of our travels and destinations!