Living in a treehouse!

Cooper. Our month in Costa Rica is almost up, but luckily, we’ve saved the best for last! Finca Bellavista, a treehouse community, where people build treehouses to live in and then rent them out to other people, like us.

We arrive at Finca Bellavista. The only reason we found Finca Bellavista (FBV), was because we saw it on a TV show called "House Hunters -- Off the Grid". When we went to the office, we were greeted by the guy who was on the show! After that, we took our luggage and groceries and hiked into the jungle 25 minutes to our treehouse. When we finally got to our treehouse (called El Castillo Mastate), it looked just as amazing as it did online. With the main kitchen & living area and my bedroom on the ground, on the edge of a deep drop-off, and a big bridge across to the 100% pure treehouse which is 90 feet of the ground, here is a picture of it. 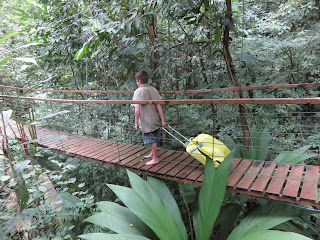 I usually don’t put so many pictures so close together, but this is also worth seeing. We had no ordinary faucet in the treehouse, definitely not. It was a really big sea shell! 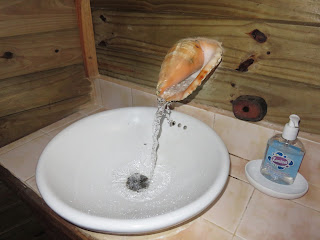 We all went to bed a few hours later. First night sleeping in a treehouse!

We had breakfast, lunch, and dinner and did nothing else that day. Only joking! The way that the FBV is laid out, there is a red trail, which is the main trail and is a big loop. There are also some side paths, like the green trail and the orange trail. I know, they have such creative names! To go down to Base Camp that morning, we took the long way around on the red trail. On the map it looks flat. Hmmm. It is NOT flat at all! What we were thinking of as a 20-minute walk turned to a challenging 1-hour hike. In Canada, we really enjoy hiking. Here, not so much. Because it’s so humid, you literally can’t walk for 10 minutes without dripping in sweat. When we reached Base Camp, we each selected our appropriate-sized rubber boots for walking after dark for snake protection (to avoid ankle bites). While we were doing that, a dog came up to us, but this was no ordinary dog at all. It was the cutest little playful puppy you have ever seen! His name was Mowgli (he belongs to the FBV rental managers). 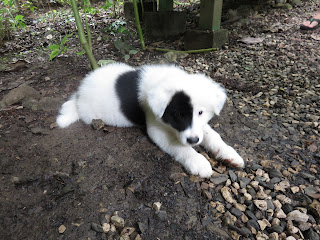 We swam in the river until it started raining (then you're supposed to get out, in case of flash flooding). After we got out of the water, we tried going back to our treehouse by taking the green trail. But after 20 minutes, we felt like we were going the wrong direction, like maybe we had missed a turn, so we turned back to take the red trail. After having lunch and being lazy, we decided to head down to Base Camp for happy hour and dinner. Mowgli was at happy hour! He had a little bone with him too. They had dominos, so I set up a track, and when I was finished, I put Mowgli’s bone at the start, so he came over and pushed the first domino with his nose. Supper was good too. We hiked back up went to bed. Second night sleeping in a treehouse!

I woke up and I knew what day it was. It was the first day of grade 7 back at my school in Calgary (we always start mid-August, a couple weeks earlier than most schools), and I bet you that I am the only person who has woken up in a treehouse for the first day of school. We all went down to Base Camp to go zip-lining after breakfast. We took the green trail from the other side this time so we could see where we went wrong yesterday...and we felt really stupid. If we had just kept going around one more turn, we would have seen the sign showing that we were heading in the right direction. When we got to Base Camp, we went on their zip-line Sky Trails. It was really fun! In La Fortuna, I couldn’t do all of the zip-lines by myself, only some (because I don't weigh enough to make it all the way across the longer lines), but here I could do them all by myself! They usually have 7 zip-lines, but unfortunately, 2 of their zip-lines had to be taken down due to safety from recent flooding. Here is a picture that I took of me on the zip-line looking down at the river. 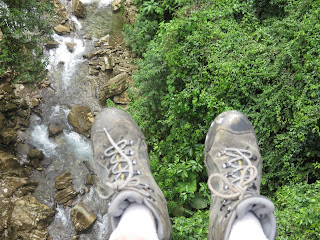 We went back along the green trail (this time knowing how far we needed to go), and went down to swim at another one of the swimming spots on the river. It started to rain again. It is the rainforest, after all.  So we went back to the treehouse and spent the rest of the day there, including cooking our own dinner. Then we went to bed and said: third night sleeping in a treehouse!

Today was our lazy day! We were planning to go for a nice long swim in the river, but it rained a lot, and when it rains, the river becomes dangerous. So we ended up not swimming. When we headed down to Base Camp for supper, something funny happened. When someone asks you what something tastes like, a joking answer is usually that it tastes like chicken. But tonight, the opposite thing happened: we ate chicken…and oddly enough, it didn’t taste like chicken! It was very good though. We headed back up to the treehouse and went to bed. Fourth and final night in a treehouse!

Good-bye El Castillo Mastate, and good-bye Finca Bellavista. We will miss you…

And we will miss you too Mowgli!