Cooper. Woke up @ 7:30 am for a 8:30 am pickup for a 9:00 am flight to Tuktoyaktuk. So many numbers! We left in a small plane for Tuk by ourselves. The flight was only about 30 mins long. When we got there, we arrived at their one room small airport and got picked up by own guide Eileen, and she took us to her house. At their house, they also have a tent. We went into the tent first. In the tent, there were lots of animal skins and animal heads. We then went inside and ate some of their tasty local food: caribou soup, eskimo donuts (bread), muk tuk (the skin and blubber of a beluga whale and cut up in small cubes), beluga jerky (dried whale meat), and smoked fish. My favourite was the the soup and eskimo donuts, then muk tuk, then jerky, then fish (I don't like fish in general). She then showed us around town. Something really cool was the ice house, which they use for freezing things in the summer. It was just a hole that led 35 feet underground with 19 freezer rooms! Really cool! Sadly, we couldn't go down because it was dangerous and we might die from falling off the ladder at that height. But I would do it anyway. Next we went swimming in the Arctic Ocean! Well, only my dad and I, my mom just dipped her toes in. Then we went on a small motor boat out in the ocean to spot some whales. We only saw one, barely, but it still was fun! When we got back to Inuvik, we had supper at a cool place called Alistenes where they cook the food out of a school bus! It tasted great! We have got in touch with our friends here now. Going to see them tomorrow. I hope to go in the pool tomorrow as well, I have been waiting for the pool day. Waited 4 days now. But that's ok! I'm writing every day in my journal that Ms. P (my awesome school teacher) gave me as a gift. Hope to write another blog entry tomorrow!

Vern.  We wound up our day with a tour of Inuvik's Igloo Church.  (Strongly recommended.)  Our guide only had keys to the front door of the church.  The front stairs were undergoing replacement and the construction crew had barred the door with a wooden slat to prevent patrons from exiting the church and falling through the open platform of joists four feet above ground.   A quick climb up onto the platform showed that the slat was simply screwed into the surrounding door frame.  One of the waiting tour group supplied me with a #2 Robertson from his car, the guide handed up the keys, and I was able to go through the front and open one of the side doors so we could get on with the tour.   I’ve enjoyed the challenge of getting into locked places over the years (mostly legal), but this is the first time I’ve had to break into a church.

Foodie Report:  Unusual Eats
Most of today's Unusual Eats are covered in Coop's post above.  I'll add to this our fare at Alistene's:  reindeer chili.  Santa, sorry about Prancer.  Kids, your Christmas presents may be slightly late this year. 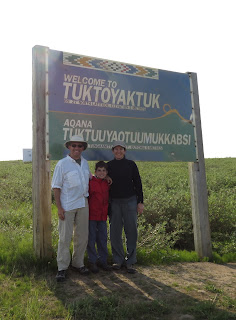