Cooper. If anybody was wondering why there were no posts over the last two weeks and a half, it is because we were enjoying our time with no internet at our lovely cottage in Ontario from July 9 - 23 (between Inuvik and Costa Rica).

July 23:
We left our cottage to head out to our friends' place near the Toronto airport to catch a 8:00 am flight, getting us up and out at 5:00 am. A late night today and an early start tomorrow!

July 24:
Got on our early plane ride to Costa Rica, a five hour flight. Those who travel on planes would know that usually the plane would have seatback screen entertainment for shows and movies, but this one didn't! But...it did have Wi Fi to watch movies they give on your own device! When we landed, we got on a shuttle to our hotel, the Adventure Inn Hotel. It is a great place, a nice pool (key for the one who's writing this post) and overall a good hotel. I'm happy that we're coming back here in four days.

July 25:
Early wake up again, the same time as yesterday, and then we got off on another long trip to Turtle Beach Lodge, in the National Park in the rainforest. Meaning a four hour bus ride with a half hour stop for our breakfast, but I slept through most of the ride, but on the ride, we were told that the pool was closed! ahhh! That was disappointing. Also right afterwards, we got onto a boat for another hour and a half because the only way to the lodge is by boat. We had a pit stop in Tortuguero, a small but nice little town. But also, while on the bus ride, we saw pineapple growing fields, yam growing fields, and banana fields. And I bet you haven't been keeping in mind that it's a 32 degrees hot day with lots of humidity in the air, making everyone sweat up a storm, and to top that off, we had to wear a lifejacket making it all worse. We finally made it to our lodge by boat in the rainforest. We collected our luggage which was taken there on another boat, and we settled into our hotel room and went to lunch. Lunch was, in this order, cabbage, tomatoes, cucumbers, rice, beans, a veggie combo, pasta, sauce, and meat. Why does the food and its order matter? you may ask. You will see later. Later in the day but before supper, we went on a cool rainforest hike in rubber boots because it was really muddy and we saw lots of little red frogs, called Blue Jean Frogs (they are called that because their legs are blue even though the rest of their body is red), plants and a small, cute turtle that walked over someone's boots. It was then supper, and it was the exact same setup as lunch!

July 26:
Still not a sleep-in day, 5:15 am to go on a morning life jungle tour, which was really cool, but too early in too many days in a row. Everyone saw many things on the tour, we saw Kingfishers, Herons, Toucans, Ningas (bird that swims underwater to catch fish), River Otter (which is my spirit animal), the Blue Jean Frogs, Herons in their nest, really nice butterflies, Caiman (like a small alligator), lizards, a turtle, and a swimming monkey, which was apparently super duper rare. And another big bird in a tree at the end that I spotted - don't know what it's called. Afterwards, we ate breakfast (which wasn't the same as yesterdays lunch and supper - good!). We right after breakfast went on a small kayak trip through the small rivers in the jungle! I had a river kayak, so I kept spinning in circles all the time. I really was annoyed with the kayak. After we were out for about an hour, we returned to our lodge to take a nap to catch up for our lost sleep in the morning, but also to prep for tonight when we will be out until about 1:00 am, hoping to see turtles laying eggs - which only happens late at night! Yes, at 8:30 pm that day, we left on a forty minute boat ride to Tortuguero, in the national park section, to go on a turtle tour. After we got off the boat, it was a short walk to a shelter from the rain (it was slightly raining). We were told a whole bunch of facts about the turtles. By the time we were ready to go to the beach area, it had stopped raining. We had to wait for another half hour on the beach away from the turtle until she was laying eggs and in her "trance" or else we would scare her back to the ocean. The turtle was over one meter long (108 cm to be exact). We got to see her laying her eggs, and the average turtle lays between 80 - 120 eggs each time, and I think this one was closer to 120 eggs. After she was done laying eggs, she buried her eggs with the sand. We were there to see that at the exact right moment. Along with her, we saw 2 other turtles come up from the ocean, but then they must have thought "no, with all of these weird people", and go back down to the ocean again. Seeing these three HUGE turtles was the coolest experience ever!!!

July 27:
Finally a sleep-in morning! Also, the pool opened! yay! After breakfast, we went kayaking again, even though I didn't want to because of my bad kayak yesterday. But I am so glad we went again but this time with a different kayak! It was so awesome, and instead of 1 hour, we stayed out for 3 hours! 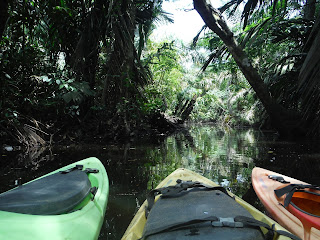 July 28:
Leaving time! Had breakfast and left on the same boat for our 90 min ride back to the bus loading area. On the bus though, we were delayed by a really bad car accident that blocked the highway. People died, which is sad. We were originally told we were going to have to wait for over four hours, but we ended up starting to slowly move after one and a half hours. Eventually we made it to our Adventure Inn Hotel again!

Cooper. Please feel free to leave a comment on the separate posts we make. We enjoy reading what you think of our travels and destinations!


On my list of unique experiences, the turtle tour in Tortuguero National Park, Costa Rica has secured a place in the Top 10.

Where else in the world could one get up-close and personal with a 150 kg turtle returning to her birthplace after journeying thousands of kilometres and then crouch by her side on the beach in the middle of the night and watch her lay 100+ ping pong ball sized-eggs?