Wow, THAT was stupid!

Vern.  Have you ever done anything really stupid?  I mean REALLY stupid.  The kind of OMG moment that makes your stomach bottom out, leaves you short of breath and then dredges up your entire vocabulary of four-letter words?  Oh, c’mon.  You know what I’m talking about.

Over our journey, we as a family have subconsciously kept track of a few of those spectacular lapses of reason and/or common sense.   The good news is that only three of these stand out.  The bad news is that it was unanimously agreed that I own all of them.   In the hope of redemption, I have decided to share these incidents.  That, and the fact that if I don’t write about them, Carolyn or Cooper will, and they’ll seem much worse.

Idiotic Act #1 – Fight or Flight
Taken in isolation, this particular brain fart wouldn’t be a big deal.  I mean, everyone forgets to take restricted items out of their carry-on baggage occasionally.  But usually not when there has been a precedent.   Or two.

The first precedent came on day one, back in June 2015.  Cooper really wanted to bring his Swiss Army knife on the trip.   He hunted for weeks, and, after we’d sold almost everything we own and packed up the rest, it hadn’t turned up.  Imagine our surprise when it was expertly located by security at the Calgary Airport … in Cooper’s own backpack.  Luckily, all was not lost:  good friends bidding us farewell at the security checkpoint took the knife and mailed it to other friends in Toronto where we retrieved it a month later.

So I had my warning.  Not enough of one, apparently, to prevent me from forgetting my own Swiss Army knife in my pack at the airport in the Galapagos Islands.  Again, luck was on our side:  I realized the mistake immediately after sending our suitcases through check-in.  It’s a tiny airport, and airline staff kindly walked me through security where I was able to place the knife in our checked luggage.

I don’t count that minor misdemeanour.  My true idiocy emerged at Rio International, where, accompanied by a feeling of déjà vu, the uncompromising security staff at the huge airport dug my knife out of my backpack thirty minutes before departure time.  Carolyn was not impressed.

Happily, I pulled off the save.  I sprinted back down the escalator where I found a bookstore and a café that could each spare me a small box.  I put the knife in the bookstore box, shredded the café box to use for padding, wrapped the whole thing up in packing tape donated by a friendly woman at check-in, and checked the knife.  It arrived safe and sound in Sao Paulo.   I will NEVER do that again.  I hope. 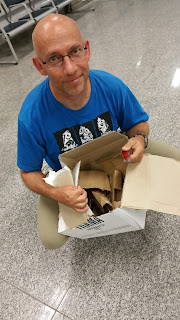 Idiotic Act #2 – Passport Control
We’d decided to spend our last few days in Brazil in the small resort town of Paraty, a six-hour bus ride from Rio.  The twenty-five minute cab ride from our hotel put us at the bus station a good half hour before departure.  It was during our leisurely check-in that I abruptly realized I had left my passport in the scanner at the hotel, where I’d copied it an hour before.  Carolyn was not impressed.

I did not want to leave my passport at the mercy of hotel staff, asking for it to be mailed on to Paraty.  Leaving my bags with Carolyn and Coop, I dashed out to the taxi queue where I found only one cab.  But man, did I find the RIGHT cab.  1)  The driver knew the hotel and the exact address.  No looking things up or asking for directions.  2) He appreciated the need to make the 50-minute return trip in less than half an hour.  3)  We mutually agreed that bothersome obstacles such as stop signs, no-passing lanes, and red traffic lights were more of a suggestion than legally binding rules of the road.

The round-trip, including a mad dash through the hotel lobby to the computer with the scanner – to the surprise and alarm of some hotel staff and patrons – took 25 minutes.   It also included a big tip for my life-saving cabbie.

Idiotic Act #3 – Jumping to the Pump
I still don’t know how I managed this one.  We were making our way through northwest Argentina in our rental car, excitedly heading towards Aconcagua National Park, hoping for a short hike to the base of Aconcagua itself, the highest peak in South America.   As a rule of thumb while traveling, I like to keep the gas tank above half full.  You’re in unfamiliar territory, you never know when you’ll hit your next gas station, and there’s no guarantee that they’ll have gas.   We weren’t in a big rush, but when we pulled into the station and nobody emerged to fill our tank, I took it upon myself.   It was only after fueling up that one of the staff rushed over and explained in rapid Spanish that I had filled my gasoline-only tank with diesel.  Well, shit, that’s not good.   Carolyn was not impressed.  (Neither was I.)

I knew immediately that I couldn’t start the car, or diesel would get into the fuel line and possibly into the engine.   With the help of a couple of service station staff, we pushed the car into a parking spot and I considered my options, amongst much (well-deserved) verbal abuse from my wife.   The only possibility was to drain the tank and re-fill it with gasoline.  The critical drawback to this plan was that it was siesta time, and the town mechanic wouldn’t show for two to three hours.  And of course I’d have to pay the asking price.   To add insult to injury, the garage was less than 200 metres from the gas station – I could have pushed the car there myself were it not along the highway.

But there was no real option.  Carolyn and Coop shacked up in a nearby restaurant beneath a ceiling fan, and I waited it out at the station.   It was almost five hours from the fatal fill-up to the time when we were back on the road, $120 poorer.   We arrived at Aconcagua too late to hike and had to content ourselves with a few pictures of the distant summit.  I will NEVER do that again. 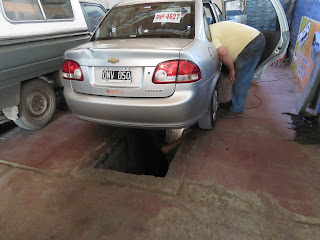 Today is June 25, 2016, and we are down to the final six weeks of our trip.  This should mean that there is insufficient time for me to do anything quite as stupid as any of the above.  Wish me luck.


To see pictures from our trip so far, click here