Cooper. I hadn’t realized that Singapore was so small until we arrived. Confusingly, the country of Singapore is just one large city on an island, but it’s a city with a lot of cool stuff. Singapore was the most similar country we have visited to Canada on the whole trip so far, as it had small houses to huge skyscrapers, but it was still very different, very hot. We enjoyed the Jurong Bird Gardens with its assortment of colourful birds and shows, and we also loved the Future World exhibit at the Art & Science Museum...but we loved the Marina Bay Sands hotel even more!

We spent 2 nights at a friend’s place and 1 night at the amazing Marina Bay Sands hotel that has an infinity pool on the 57th floor rooftop! Looking over the city above or level with the surrounding skyscrapers while swimming in a pool is awesome; the infinity part was a really nice touch (until it broke). Our room was the fanciest one we’d had yet on the trip and one of my favourite trip quotes was made here: “Your hotel room is on the forty-first floor”. The curtains covering the spectacular view out of our window even opened automatically when we entered the room and could be closed and re-opened with the simple touch of a button. It was a little bit disconcerting actually when we entered the room to have something moving inside that’s not controlled by us, until we remember that it’s just the curtains opening themselves. 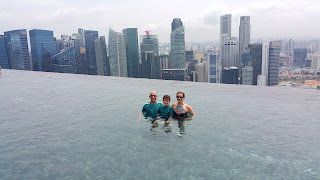 Across from the Marina Bay Sands hotel, there sits the symbol of the city/country of Singapore: the Merlion. It may be a strange word, but it’s exactly what it sounds like, a half mermaid, half lion creature. It has a constant stream of water spewing from its mouth into the ocean. Near here were lots of outdoor food markets, and I was surprised to see the local food was actually somewhat like Vietnam’s (I like the Vietnamese food better though). 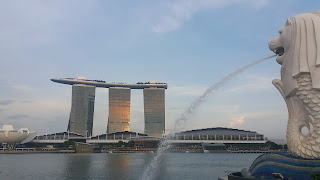 In Singapore they have a fruit called a durian, but it is no ordinary fruit because it stinks so much. People love it though, because it’s tasty. However, because it smells a lot, there is a law that it is illegal to have possession of one of them on the public transit lines. Another thing that I found strange is that it’s illegal to chew any gum in public. Also, people don’t drink anything at all in public other than at restaurants. We weren’t told that there was a law against this, so we had our water bottles with us while we went along our day. 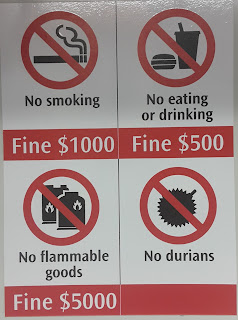 Thank you Singapore for your wonderfully smelly durians (and one of the best swimming pools ever!!!)


Carolyn.  In addition to the excitement of being in a new country for the first time, I had been looking forward to Singapore for another reason:  I would be able to line dance here!

By now, I have been missing this part of my "normal" life.  I did have a chance to attend one line dance class in Cape Town, South Africa in March, and now the chance to attend a class in June - wow, only 2 classes in over a year - that's a far cry from the 6-7 per week that I used to attend or teach in Calgary!  Yes, some of my friends understand that I am going through withdrawal pains.

I had so much fun joining a class in Singapore!  Thank you to my line dancing friend and instructor, Philip Sobrielo (Singapore native whom I know from our annual Vegas line dancing event) for not only inviting me to his classes in Singapore, but also for hosting our family for two nights in his new apartment...you're awesome! 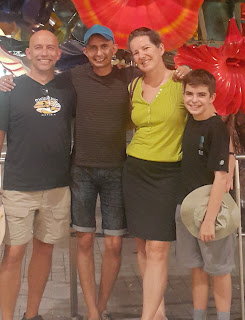 To see more pictures from our trip so far, click here