Cooper. India is many things. You can say that it is crowded, it is beautiful, it’s dirty, it’s big, it’s polluted, and that is all true. For almost the whole trip, my parents have been telling me about India, and how crowded and different it is; but we arrived in Kerala (Cochin), and it was green, pretty, and clean. While there, we went on a beautiful 2 day house boating trip on the southern India river canals (called the Kerala backwaters) and after that we visited the tea plantations (which were even greener).…and then we went to Delhi.

In Delhi, we saw dogs and cows searching piles of garbage on the streets for food. Cows were everywhere! Cows just wandering the streets with cars avoiding them, nobody cared. There were three lanes on the road with six cars across! The vehicles are honking their horns non-stop, forcing us to cover our ears several times to avoid breaking our eardrums. Our first morning in Delhi, my dad and I wanted to go out for a morning run, when it wasn’t too hot yet (33 degrees C was a cool temperature), because it’s usually 43 – 45 degrees C in the afternoon. We got out of our hotel and looked down the road, but we couldn’t see the end of it because of the ‘smoke’ obscuring the view. The air didn’t smell of fire smoke, so we asked a local and they said it was pollution. Gross. We decided not to do our run because we didn’t want the pollution in our lungs.

One of my favourite things to do here is ride in a tuk-tuk: a sun protected motor tricycle. The tuk-tuks were everywhere, more than the cars. Tuk-tuks are very loud and are the biggest polluters. The drivers of the tuk-tuks know that in the tourists’ countries, they pay a lot more money for a taxi than they do in India, so when we ask for a tuk-tuk driver to take us 1 km, they say: “300 rupees”, which is 6 Canadian dollars. But, if a local asked to go the same 1 km, the driver would say: “40 rupees”. We always bargain them down to a reasonable(ish) price, which is still more than a local would pay. 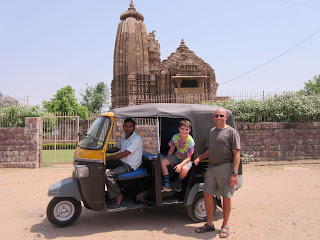 After Delhi, we went by train to Agra, the home of the Taj Mahal. While waiting for our train, we sat in the station and observed the locals’ favourite thing to do on the train: throw garbage out the window. That part was disgusting, but when we got on the train, it was clean and comfortable (and air conditioned). The next day we went to the Taj Mahal. It was amazing. Unfortunately for us, they were cleaning the big towers around the main building (called minarets), so scaffolding was blocking some of the view, but it was still beautiful. 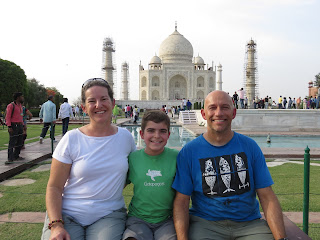 Khajuraho was a very nice place, with amazing temples from a thousand years ago that are preserved extremely well. The temples are completely covered with hundreds of detailed sculptures on the outside, and it was all chiseled by hand. We toured the temples with a guide, and he showed us how to meditate inside of the temples. I didn’t really like meditating, but I think my parents liked it. 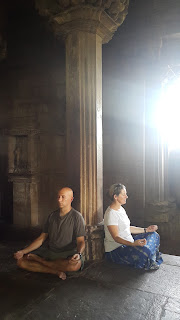 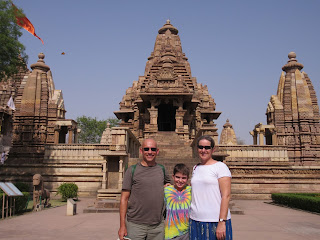 Varanasi is the place where Hindus come to die to stop the reincarnation process. To do so, most bodies are cremated and then put in the river, but some bodies are just wrapped in cloth and put in the river whole. The reason they are put in the river is because the Ganges River is the most holy river in all of India. Every night, thousands of candles are ‘donated’ to the river for a big (and loud) ceremony of chanting and bells. One night we attended the ceremony on land in the massive crowd, and another night in a boat on the river, where we set off candles with a New Zealand family (but the wind blew all of our candles upside-down). 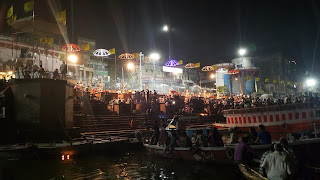 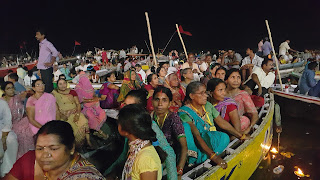 Our hotel (Alka Hotel) was in the ‘old city’ part of Varanasi, which is a no cars zone. It’s a maze of alleyways that are too small to fit cars and are filled with cows, dogs, small shops, and temples. Our hotel had a Ganges River view, so we saw all of the boats going by. We saw the burning Ghats, which is the place where the dead bodies are cremated in open bon-fires and the ashes of the bodies are thrown into the river. We couldn’t take pictures on land (to be respectful to the dead), but we could take pictures from the boat. Despite the fact that it is the dirtiest water I have ever seen, the locals bathe and wash themselves in it and drink it as well (mmm… dead body flavoured water!). Weirdly, people also throw their garbage in the river, which is a strange way to reward the river of its holiness. 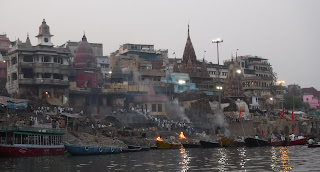 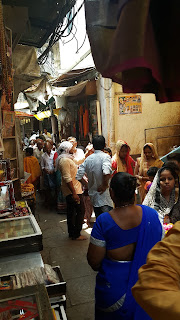 After our five nights in Varanasi, we were sad to leave and go back to Delhi. When back in Delhi, we went to a modern temple (unlike the old temples in Khajuraho). The temple was much, much bigger, and all of the carvings were made with modern, mechanical tools, yet it was all still very impressive. Also in the temple, we saw a display of Swaminaryan’s life (a boy who had no fear, and walked 12 000 km by foot without shoes in India), and the display was done by animatronics. It was cool, but I think that animatronics are really creepy. Part of the exhibit included a boat ride, and it felt like the ‘It’s a Small World’ ride in Disney World.

Today is our last day in India, and overnight we are flying to Vietnam, but before we leave, we are going to the toilet museum! I don’t know why or who thought of that, but we’ll see!

Click here to see the rest of the pictures from our world trip so far: Trip Photo Album
Posted by Unknown at 09:04